Okay, let’s have a closer look at setting up your ES-5, and the MIDI pedals on your board. If you start with making clever basic settings and creating template Patches suitable for your rig, it will make your life easier later on. Here’s a video I made with tips for ES-5 users; they are not meant as a tutorial for ES-5 starters, you will need some ES-5 basic knowledge to understand them (which is provided in this series of articles). We will get to each of those 8 tips later in this series of articles.

Short version of first ES-5 setup steps: Make sure you are on the current firmware. For your global settings: Press EDIT, ► to the “Play Option” menu, ENTER; then, set Switch Mode to PUSH, Bank Chg Mode to WAIT, Patch Slct Mod to MODE 2 and Beat Indicator to ON. EXIT back to “Play Option” menu and ► to the “MIDI Settings” menu, ENTER; then, set MIDI Out mode to THRU, Rx Ch to any MIDI channel not used by your other pedals, Sync to INT (unless you use an external clock) and Clock Out to ON. In case your connected expression pedal or external dual footswitch doesn’t work, check the “Others” menu. Also, make sure the other MIDI pedals on your board are set up correctly to communicate with your ES-5; each with its own MIDI channel, sync to MIDI Clock active if you use your ES-5 as master clock, and MIDI Thru activated in case your MIDI pedals are chained. Done, skip to next article :-)

The ES-5 comes with a user manual. This manual isn’t the best to make a newbie understand the ES-5. Still, it is your friend; my advice is: Read it. Especially the parameter lists on pages 9 to 12 are a very helpful reference that I keep going back to. (Oh, and there’s the add-on manual for the new features introduced in firmware v2.0, too.) Another helpful resource is this online guide on the website of Roland Australia.

So, what does the ES-5 have to offer? There’s three basic modes:

Typically, you will create your Patches in Edit Mode; and you will play gigs and rehearsals in Memory Mode. Manual Mode can be used for experimenting/jamming, or for those occasions where you just want to switch on/off one specific loop within one Patch.

Some people say they only use Manual Mode. To me, this is a waste of resources; if you only want to manually switch 5 loops, there’s way cheaper and smaller devices than the ES-5. The powers of the ES-5 lie in its ability to save Patches with different loop on/off combinations, with different orders of loops, and adding MIDI and TRS switching jacks to that mix. To unleash those powers, learn to use Memory Mode.

We will get to details later; this is just to give you an impression what the ES-5 can do. So, how do you set it up in the first place?

Setting up your ES-5

Power up your ES-5. Press the EDIT button. Now, with the cursor buttons ◄ and ►, you can scroll through 8 menus; you can find all ES-5 functions/settings in these 8 menus. With the ENTER button, you can go inside a menu and navigate menu pages with ◄ and ►. ENTER again to make settings on a menu page, using ◄ and ► to navigate and - and + to change values. DISPLAY/EXIT will take you out of the menu/page you are currently in. WRITE will write the current patch.

Now, what can be confusing: The first two menus, PATCH and CTL/EXP, contain settings for the current Patch. (In certain scenarios, some CTL/EXP settings will also have a global effect ... we will get there later.) When you change those settings, you need to save the Patch by pressing WRITE three times – otherwise your changes will be lost when you switch to another patch. The other six menus however are global; changes you make there will affect all Patches, and are written to the permanent memory of the ES-5 right away, not needing any WRITE/saving procedure.

Let’s check which global settings you may wanna make in those 6 global menus. No, wait ... first let’s check if your ES-5 is on the current firmware. You can find out by holding EDIT while powering up your ES-5. This article assumes version 2.01, which was released in August 2017; there were no updates in the meantime (at least until September 2019). Still, you may wanna check on the boss website for newer versions; that where you will also find the firmware files and installation instructions.

Also, before we dive deeper into global settings: In case you bought your ES-5 second hand, you may first want to reset it to factory settings. To get there, press EDIT, navigate ► to “Utility” (last menu on the right), ENTER, navigate ► to the final item “Factory Reset”, ENTER. You can reset only the global settings (SYS), or also all Patches, or all Patches from 111 up to a number of your choice.

So, lets have a look at those global menus ... short version: The only ones you really need to care about are “Play Option”, “MIDI settings” and “Others”. The 6 global menus are:

One additional note on dual footswitches connected to CTL In: The ES-5 manual recommends momentary-type switches. But the ES-5 also works with latching switches, they just behave a little strange: My footswitch is a latching dual footswitch with a TRS jack; connected to the ES-5 CTL in with a regular TRS cable. Now, when I power up my ES-5, I always have to “wake up” those switches first: I need to hit the each switch a few times. “A few times” as in: irregular; sometimes 2 kicks will do, sometimes I need 7 or 8. Once one switch will start to function, the other will immediately work, too, and they will both keep on working perfectly until I switch off my ES-5. It has been like this from the beginning. And the polarity settings that you can make in the “Others” menu don’t seem to have an impact on this behaviour. It’s something I can gladly live with, it’s just crucial not to forget “waking up” those switches before playing a live gig.

This is a quite powerful feature, and it took me long to understand it (sorry to readers of earlier versions of this blog post!).

First item in this menu is the ES-5 Input Buffer; which you can set here to be always ON, or always OFF, or being switched on/off depending on Patch settings (PAT). My choice here is PAT – I normally don’t like the sound of the ES-5 Input Buffer, so I keep it switched off in most Patches, but I use it on a few Patches for ultra clean 1980s sounds.

In the CTL/EXP menu, you can define the basic function of each of those 10 controls (as described here). Depending on the basic settings you made in the Preference menu, the settings you will make under CTL/EXP would either only affect the current Patch (PAT), or they would have a global impact on all Patches (SYS).

What would you use this for? Me, I have everything set to PAT in the Preference menu. But SYS comes in handy if you for example want to convert the MUTE switch globally into a Bank Down switch. For this, you need to set MUTE to SYS in the Preference menu first. Then in a second step, in the CTL/EXP menu, you would go to the MUTE page – display will read “MUTE (SYS)” – press ENTER, and set Func to BnkD. Voilà, the MUTE footswitch now works as a global Bank Down footswitch (provided that Patch Slct Mod is set to default value 1 in the Play Option menu).

Important note: Setting either footswitch to SYS in the Preference menu will not mean that individual per-Patch settings that you may have made for that footswitch will be lost. As soon as you change Preference back from SYS to PAT, everything will be back to the way you had stored it before.

Okay, drumroll, let’s now dive into the most important of the global menus ...

The “Play Option” menu is a central place to customize your ES-5’s user interface. Stuff you can do here:

These are the available menu pages if you are on an older firmware. With firmware 2.01, there’s some more pages (I need none of them):

Patch Select Mode 2 (and why to use it)

What Boss calls “Patch Select Modes” actually defines how the ES-5 switches Banks (not Patches). In the factory setting with MODE1, the BANK footswitch will cycle through the Banks of the current Group; like 122 → 132 → 142 → 152 → 112 → 122. You can narrow down the available banks with the Bank Extent function described above, so you could have e.g. 122 → 132 → 112 → 122; which makes it faster to reach any Patch in the selected Banks, but makes the unselected Banks unreachable “by foot”.

So, if Bank Extent is no option for you because you want to access all Banks, then reaching certain Patches will require five kicks. Like, to get from 122 to 114, you need to hit BANK → BANK → BANK → BANK → #4. And what’s worse, if you accidentally hit BANK once too much, the whole cycle starts from the beginning.

Patch Select MODE 2 makes this easier: Hitting BANK once will put the ES-5 into a temporary “Bank select state” (hitting BANK for a second time will get you out again). Then, pushing any number footswitch will take you to the corresponding Bank. So, hitting BANK → #Bank number → #Patch number will get you to any Patch of your current Bank. Like, to get from 122 (or any other Patch in Group 1) to 114, you would hit BANK → #1 → #4.

Reasons I prefer this mode:

BTW, with global settings (using the Preference menu as explained above), you could also set up two footswitches, like BANK and MUTE, to be Bank Down (BnkD) and Bank Up (BnkU) globally. For this, you need Patch Select Mode 1; and it is even faster than Patch Select Mode 2 (again, 0.5 kicks less by average to reach any Patch of the same Group, but on a different Bank; and 1 kick less compared to Select Mode 1); but you need to sacrifice a second footswitch for this functionality. And you won’t get the extra benefits listed on the last three points of the above reasons list.

Setting up other Pedals

Before we come to creating ES-5 Patches in the next article, let’s quickly have a look at the other pedals on your board. In the previous article, we already covered signal chain: So, you should have decided by now which pedal goes in which ES-5 loop, which pedals may share a ES-5 loop, and how your MIDI chain goes.

What remains to do is to set up your other MIDI pedals in a way that they communicate well with the ES-5. This typically means:

Now, you should be ready to create template Patches on your ES-5; which will be covered in the following article. 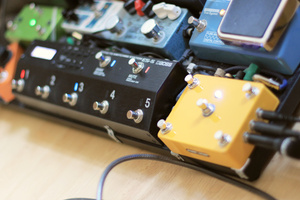 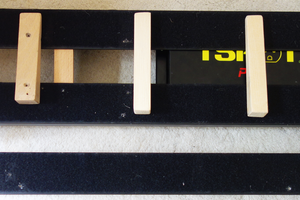 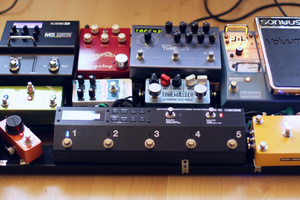 The Boss ES-5 loop switcher has been the switching central of my pedal board since autumn 2017. I did a lot of experimenting and learning with it, which…