As an electric guitar player, there are many reasons to play a mono setup. For bass players, even more. In this article, we’ll have a look at those reason, and I’ll explain why I still love my stereo setup. Spoiler: If you a play stereo rig on stage, you should be aware that you do this extra effort primarily for yourself. Which still can be beneficial for the audience, cause if you like your sound on stage, you will probably have more fun and play better. Part II of this article will cover dry/wet (D/W) and wet/dry/wet (W/D/W) rigs.

Most humans have two functioning ears; the brain uses various factors to locate audio sources in the three dimensional world based on those two ears:

So in theory, two audiochannels – one for each ear – would be enough to cover everything a human could possibly hear. High quality headphones should be able to recreate all 3D audio information you can possibly hear without moving your head (well okay, there’s also full body perception of loud low frequencies, so add a subwoofer to that.)

But in real life, heads do move. A lot. And though there’s some parties and concerts where everybody is wearing wireless headphones, the normal audience situation will be: You are somewhere in a room with other people, hearing sound that comes from speakers somewhere. This can be a very controlled situation, like the control room of a professional studio: Here, the speaker system has been carefully installed and calibrated in relation to a few central seats where people will be located when listening. There, you still can get a correct three-dimensional audio image from just two stereo channels.

While cinemas are still very controlled listening locations (audience seats are fixed, and speaker systems can be carefully installed for long-term use), there is one big difference to a studio control room: Spatial audio perception needs to work well in a much larger part of the room, since there’s a large audience rather than just two or three people behind a mixing desk. This is where surround systems come it: Having 5 or more speakers surrounding the audience will give a more accurate spatial audio image even for people not sitting in the centre of the room; also, directionality of audio is better preserved when you move your head.

Side note: Very low frequencies, roughly below 100 Hz, cannot be heard in a directional way by human ears. That’s where the concept of the subwoofer comes from: Since reproducing low frequencies loud and clear requires large speakers and strong amplifieres, it’s more economical to have just one low bass speaker, and to cut those low frequencies from the directional speakers. Hence 2.1, 5.1, 7.1, 9.1, 11.1 systems. That’s also the reason why a stereo bass rig doesn’t make that much sense ... unless your bass sound really has a lot of mid range/treble content, and there’s not much other instruments in the band overpowering the bass in that range.

Concert Venues: The Kingdom of Mono

Unfortunately, the number of dedicated music clubs with carefully designed rooms acoustics and permanently installed high quality PAs seems to be decreasing. I’ve played quite a lot of live concerts at various kinds of venues all over Germany in the past 30 years; not a single one of them had a surround PA system installed (same is true for most concerts that I attended in the audience; the only exception I remember was Pink Floyd in the late 1980s).

Whether you are playing at bars, clubs, concert halls or open air events – you will mostly find that at least half of your listeners will be placed in not-stereo-listening-friendly areas of the room. For this reason, many front of house (FoH) engineers will run their whole PA in mono.

Another thing that I noticed while touring with rather unknown bands and artists in Germany without our own dedicated sound engineer: We often got in situations where simplicity was king. The more a band deviates from the standard “1 drumset + 1 bass amp + 2 guitar amps“ formula, the more stress you will get when sharing small stages with other bands. In other words: Non-mono guitar rigs are not very popular with stage and FoH technicians. Especially if your band is larger than a trio.

Other than pipe organs or drum sets, guitars and basses are mostly “naturally mono”. When played acoustically, a listener at some meters distance will hear their sound coming mostly from one direction; when amplified, most guitars only have a mono output (there’s only few exceptions, like some guitars have pickups with separate outputs for strings 1/3/5 and 2/4/6, allowing stereo right from the source). So, if you want stereo guitar sound, you will normally need effects to get it – such as stereo modulation, delay or reverb. Or at least two very different sounding amplifiers, to get some stereo imaging through different frequencies being highlighted left vs right.

Most of the famous recorded electric guitar sounds come from mono rigs: Guitars played through single amps. Stereo comes in trough multitracking – like, recording the same rhythm track twice and putting one take on the left, the other take on the right side of the stereo image – or through stereo effects added at the mixing desk. Sometimes also through recording the actual room around the guitar amp in stereo ... can sound great.

So, in the studio, you don’t really need a stereo rig. Live, it’s kinda inconvenient; especially if you use real amps (you will need two amps, or a full stereo amp – the Orange Rocker 32 would be the only stereo tube amp that I know of – and two microphones). Even with a digital modeler like Axe FX, Kemper or Helix, you will still need two channels on the multicore and mixer (unless there are stereo channels).

So, why play stereo? Well, standing in front of a stereo rig with nice amps and nice stereo pedals can sound amazing; as long as you are placed in the right spot, roughly at the same distance from both amps. Works great at home and at rehearsals. Works great for making Youtube videos. I also like playing stereo amps when playing duo gigs at small venues where there is no big PA and the guitar amps are not mic’d.

As said above, most guitars will give you a mono signal. You will already get some stereo effect when using two differently sounding amps. Also, two amps with built-in (mono) spring reverbs will produce a nice stereo-ish reverb sound with both reverb tanks activated. But the typical way of getting stereo would be to set up two mostly identical amps and put one or more pedals generating stereo effects in front of them. Typically, this will be a delay, reverb and/or stereo modulation pedal. Or alternatively, to use a digital modeler that produces stereo right out of the box.

You may get hum from ground loops when connecting one pedal to two guitar amps. I never had this problem with my amps (I did have it once playing my board through a friend’s Vox AC30 and a Fender DRRI), but many people do; it can be solved by isolating one output with a split transformer such as the Lehle P-Split. Several stereo-compatible loop switchers such as Gigrig G2, Musicom Lab EFX LE and EFX Mk V already have an isolated output on board (the Boss ES-8 and the RJM Mastermind PBC 6/X however don’t).

Speaking of loop switchers: If you want to build a stereo rig with a loop switcher, you don’t necessarily need a stereo loop switcher. If the pedals you use to generate your stereo signal are MIDI capable, you could use a mono loop switcher such as the Boss ES-5, put your mono pedals in the ES-5’s loops, and put the stereo pedals behind the ES-5, controlling them (on/off, preset selection) via MIDI from the ES-5.

Some stereo pedals only have a mono input; so they can generate a stereo effect, but cannot pass through any stereo from previous pedals. Others come with stereo inputs, but they mix them down to mono before feeding the internal effect engine; only uneffected (dry) part of the signal is passed in stereo to the outputs. Finally, there’s pedals that are truely full stereo. Here’s an example to explain the difference:

A very typical use of delay and reverb in a stereo guitar rig would be to have, positioned last in your signal chain before your amps:

Now, this is was happens when you hit a single note in this scenario, depending on the stereo implementation of your reverb pedal:

Be assured that nobody in the audience will notice the difference between the last two versions in a full band live concert setting. Still, if you are picky about your stereo sound, you may want to consider this when building your stereo rig. Unfortunately, many manufacturers won’t tell you whether their pedals are true stereo or not; and I couldn’t find a comprehensive online list yet. Be aware that still today, many current pedals, such as the recently released Strymon Volante, are not full stereo. (There’s a statement by a Strymon Rep on TGP explaining that none of Strymon’s Reverb algorithms are true full stereo; neither are the dTape/dBucket models on the Strymon Timeline, nor the Strymon Volante and El Capistan. OTOH, Strymon DIG and all Timeline models except dTape and dBucket are true full stereo.

So your pedal board is stereo, and you normally use it in stereo – but at a certain gig, you have to play it mono, since there is only one amp / one mixer channel available. You can get some problems here:

So, it’s best to thoroughly test mono compatibility of all your pedals/presets before using them live (and possibly create separate versions of your patches for mono and for stereo gigs). You can find a detailed article about this here: http://stinkfoot.se/archives/3577. 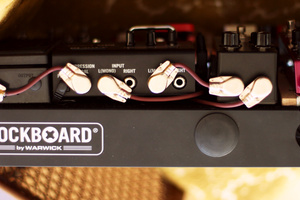 This article tries to explain what “analog” and “digital” means, why you may want an analog dry path, and why a pedal board full of digital pedals… 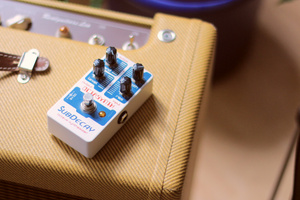 People new to the subject often get confused when it comes to octavers and pitch shifters. So, let’s have a look at what is what, which devices…